Throw the Rich Picture away when it’s finished…

I have heard it said that the real value of a Rich Picture is the process, not the outcome. 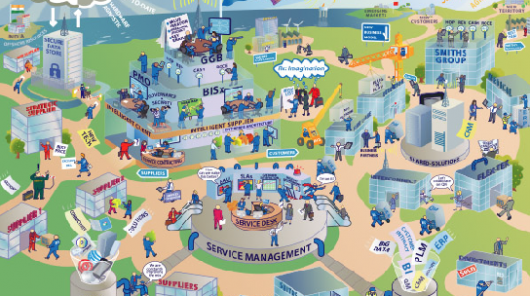 It is not necessarily the thing you want to hear when you’ve worked yourself to a standstill finishing off a hugely complex Rich Picture artwork- “throw it away!” but I understand the thinking. In many cases the journey to arrive at a signed off pencil rough requires a diverse community to arrive at an agreed “truth”. The cliché “everyone on the same page” is apposite in this case. Every person in an organisation is intimate with their own surroundings, and has some understanding of the other parts of the organisation they have touch-points with but very few get to see the whole thing in joined-up completeness. The ones in lofty positions who do have an overview rarely hear the voices from the trenches, sandbagged in behind parapets of busyness, heads down, lots to do, fires to fight. Too busy to change.

To get this diverse community to the point where they see the whole picture and realise how they got where they are, and more importantly how they need to change, is no easy task. The process of getting it all on one page, in easy to understand, impossible to forget visual metaphors, makes that almost inevitable. A Rich Picture forces the issues out into the open. It is a stalking horse for the issues. It can carry the voices from the coalface and the dreams of the Directors. It cannot make any leaps of logic or leave out important points. Bad news cannot be buried in statistics. ‘Blue Sky Thinking’ cannot be oversold to the level of ‘Over the Rainbow Thinking’.

What I’m trying to say is the value of a Rich Picture is not all in the finished picture but in the process of arriving at the agreed picture. Having said that, I never skimp on effort to create the best artwork I can and I’ve yet to hear of any client that did discard the finished artwork. Many find a more or less permanent wall space printed on foam board or even canvas. One was turned into wallpaper that filled a stairwell, twenty feet high*. The Royal Navy liked theirs so much they turned it into a limited edition print and distributed it among the relevant ‘Brass Hats’.

Throw the picture away if you like. I’ll have several copies backed up if you change your mind.

* One of the advantages of vector art over pixels is its scaleability. You could enlarge one of my artworks the size of a building without any loss of quality.