What is a Rich Picture and why?

So, what's all this about Rich Pictures? If you've never seen one before I'll try to explain… 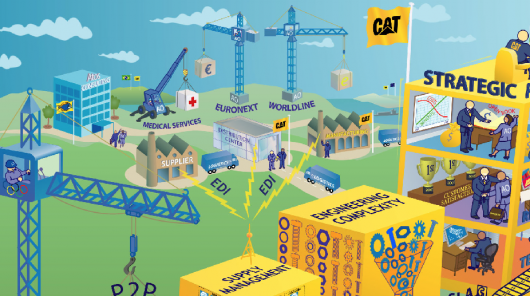 A Rich Picture is a useful tool for communicating complicated ideas to diverse audiences. Large (typically A0 sized), colourful and stuffed with visual metaphors Rich Pictures are changing the way organisations get their messages across. People talk about ‘Death by PowerPoint’ and a Rich Picture is an antidote to that, capable of rendering all the data from an eighty page document, or a thirty slide deck of PowerPoint presentation and making it stick. The presentation of a Rich Picture works best when facilitated by a well-versed expert and can be tailored to suit various audiences, drawing out the most salient points for each group. They also have longevity, displayed in the workplace like corporate cave paintings, imagining a positive outcome and reiterating the message. I’ve been told that a senior manager in a large Engineering firm used to drag people in front of a Rich Picture I’d produced and berate them “you’re not doing it like it says in the picture!”.

Each one is individually created from scratch, normally starting with a face-to-face meeting, a pencil and some paper. I have successfully completed over fifty pictures for clients such as Astra Zeneca, Atos, BAE Systems, Coats, PwC, RBS, The Royal Navy, RSA, Sainsbury’s,  Smiths Group, Transport for London and TNT. Typically the process will begin with a round table meeting with as many Subject Matter Experts (SMEs) as can be herded together and myself. They throw facts and figures at me, bombard me with graphs, slides, anecdotes and acronyms and usually towards the end of the session an overall rough outline emerges. There is the awful phrase “meta-metaphor”, meaning the overarching theme of the picture, is it a journey, a present state or a future state? Shall we use a stylised building as a metaphor for the organisation, or do it as race, an aeroplane in flight, a mountain to scale? Once this is agreed it becomes a matter of fitting the rest of the story into this idiom. Of course we can take all sorts of liberties with perspective, with time and with metaphors; if people talk about a “Mammoth Spreadsheet” why not represent it as a Wooly Mammoth, chewing up bundles of data and leaving stinking piles of useless stuff in its wake? People often say “I’m not a visual person” and then speak in a series of visual metaphors “we feel like we are stuck in treacle’, “we are pedalling hard but not going anywhere” “we spend all our time hand-cranking reports”; I’ve trained my ear to listen out for these nuggets and many of them make it into the picture. 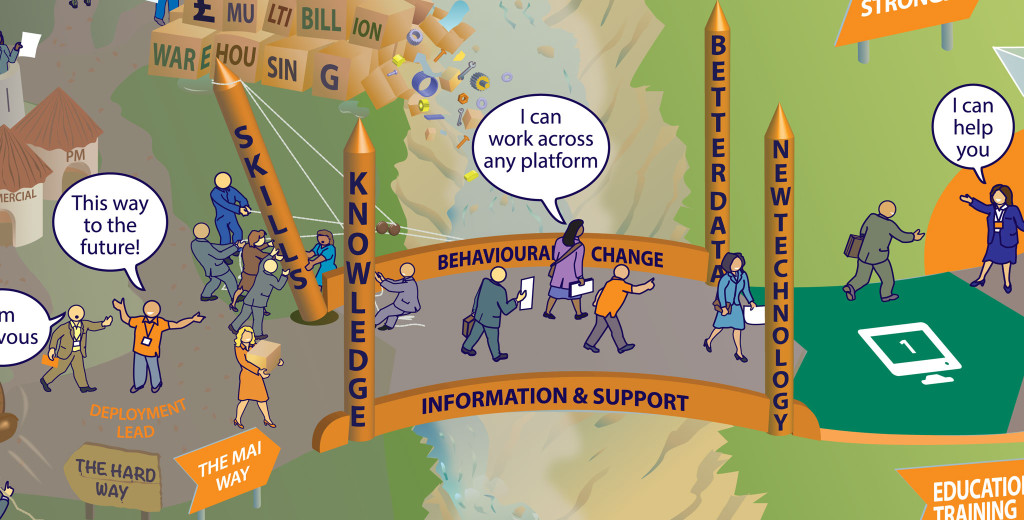 A first pencil rough is presented (usually by email) and this forms the starting point for an iterative process involving as many stakeholders as deemed necessary. Feedback is gathered and upon receipt I begin to incorporate it into the next pencil rough. I try to turn pencil iterations around with twenty four hours whenever possible, to keep the pace of the picture high. How long the process takes from start to finish depends largely on how quickly feedback is received. The Royal Navy currently hold the record with me, managing three iterations in one working week and being ready for me to start the artwork before the weekend. Artworking these highly detailed pictures typically takes a working week and I deliver work-in-progress screen grabs every day so that errors can be spotted early and improvements can be suggested. This allows control to be in the hands of the client throughout the process. There is no big reveal ‘ta-dah!’ moment, no shocks or surprises. It’s always the client’s picture and nothing goes into the picture without prior knowledge.There’s time at the end for tweaks and error corrections. The artwork remains editable and I keep the finished version on file should changes be required down the line.

Looking at someone else’s Rich Picture can be impressive but large parts of it will be meaningless to people from the outside looking in. Once you start being measured up for a Rich Picture of your own the experience is much more like having a suit hand made, every detail just how you want it. Typically a Rich Picture might be one hundred billable hours and take around a month from start to finish but I have completed pictures in half that time when really pushed.

One of the problems for me in promoting my skills is that the Rich Pictures usually contain sensitive (occasionally secret) information which means no matter how proud of them I am I can’t go plastering them all over the internet. Fortunately the pictures are good adverts for themselves and most work comes from repeat business and word of mouth. This latest website redesign is an attempt to showcase my skills without breaching client confidentiality. This is the reason most of the images show only fractions of the whole picture and not necessarily the most recent work. If any of my clients feel I’m showing took much of their picture(s) I will happily delete the offending images as soon as notified.